After the Detroit Pistons lost to the Milwaukee Bucks in Game 1 of their Eastern Conference playoff series, Andre Drummond had some time in the locker room to reflect on fouling Giannis after getting a Flagrant 2 and being ejected from the game.

When asked how tough it was not to be able to finish the game because of his flagrant -2 Drummond said “I got to shower early.”

Jennifer Hammond is a local reporter in Detroit and asked Drummond directly about the foul on Giannis. After posting his response on Twitter, Drummond fired back quickly because he apparently was not happy about it. 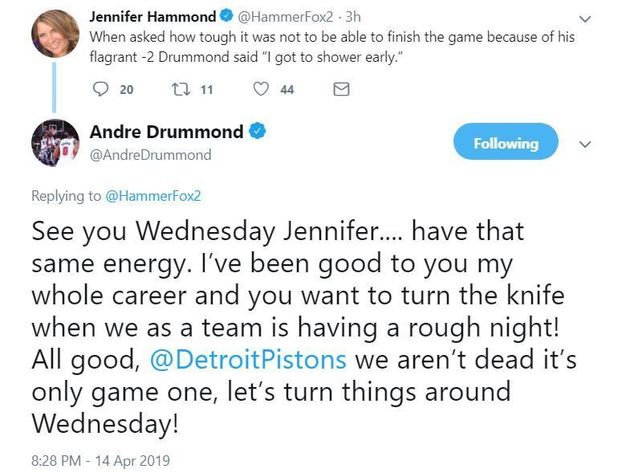 Andre finally had enough of Hammond's subtle shots. Last week Hammond tweeted about Drummond and Reggie Jackson being unprofessional during a post-game interview.

Kudos to @JohnnyKaneFSD for keeping a sense of humor and hanging in there for a less than professional post game interview with two of the Pistons “Leaders.”

This was Hammond's second pot shot at the Pistons center in less than a week, so it's not surprising he took the opportunity to respond in the manner he did.