Come draft day, in almost every sport, there are usually several players who are outed by controversial social media posts from their younger, more immature days.

When it comes to ​projected lottery pick Nick Bosa, however, he is doing everything in power to make sure he evades the uncomfortable predicament by deleting old tweets where he praised President Donald Trump and slighted former 49ers quarterback Colin Kaepernick.

These posts, per ESPN's Kevin Van Valkenburg, were removed as Bosa realized he ​could very well end up in San Francisco, one of the most liberal cities in the country, and whose franchise presently hold the No. 2 overall pick.

Nick Bosa deleted his old tweets about Donald Trump and Colin Kaepernick allegedly because he “might end up in San Francisco” https://t.co/iHiQ308GIY

Better to get it out now than be exposed on the most important night of your life in front of millions, right?

As for evidence of the former Ohio State pass rusher's Twitter history (via Sports Illustrated): 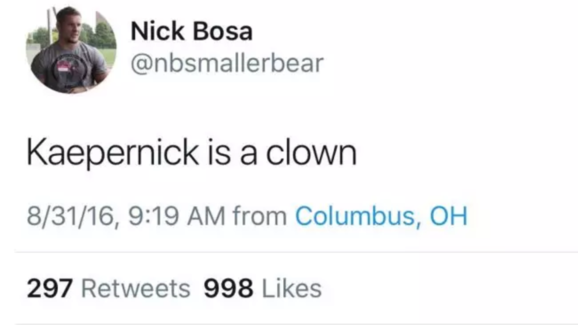 Of course, Bosa has since then been Twitter verified by the site and changed his avi but this is very much his tweet.

Admirably, Bosa is now keeping his political opinions to himself and is strictly focused on football.