​As if the Ricketts family needed any more bad press in the midst of a lackluster offseason for the ​Chicago Cubs. This ought to do the trick.

The Ricketts family that operates the Cubs franchise has long come under fire for failing to separate sports and politics, as they are regular donors to conservative campaigns and think tanks. While the owners themselves stay out of the spotlight as often as possible, choosing to keep the focus on the feel-good story of their curse-breaking ballclub on the North Side, this is inexcusable and sure to cast a bad light on an organization that, amidst everything else, cannot avoid chaos.

Well this is bleak https://t.co/39yGYajeWf

One email in particular features a disgusting joke which ends with a blatantly racist punchline. How does the Ricketts family patriarch respond to this? It was a "great laugh," evidently.

This racist joke is a "great laugh" to Joe Ricketts. Can't wait for the Republican Party, which of course detests racism, to start returning his money. https://t.co/eejwishcnn pic.twitter.com/0qt7Szr4Gs

​The Ricketts family firmly backed the Donald Trump presidential campaign in 2016, and simply could not imagine a country in which Hillary Clinton was the figurehead. In 2012, the elder Ricketts considered Barack Obama beyond the pale as he ran for re-election, and even pedaled racist and Islamophobic conspiracy theories about him via email, suggesting a clearly doctored video of the then-president admitting to being a Muslim was somehow hidden from the likes of Fox News.

Other emails discussed the possibility of Obama having a secret life involved in drugs and sex work, and how future-President Trump was a serious thorn in his side. 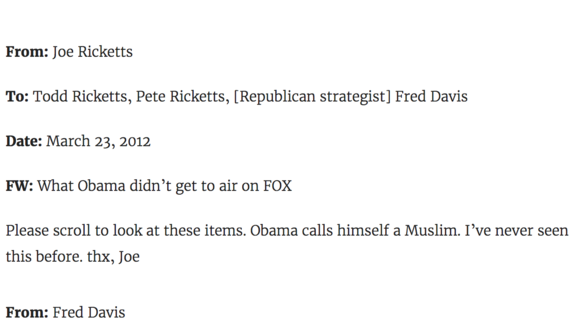 Unfortunately, this was only the tip of the iceberg in terms of Ricketts' disturbing activity. He views the United States as an inherently Christian country, as he stated on multiple occasions, and his continued statements back up this sentiment (however anathema they may be to the text of the Constitution).

Ricketts' views of Muslims are borderline barbaric. In one email, the co-owner stated the following after seemingly sarcastically admitting he was "conservative and selfish":

"I’m giving some consideration to having a book written with the title, Islam, Religion or Cult. It would describe many things about Islam but most importantly describe and define where Islam crosses the line from religion to a cult.

​​Ricketts' racism is by no means limited in scope, and leads many to wonder how he's qualified to have a position overseeing a sport which celebrates diversity--specifically the life and accomplishments of Jackie Robinson and Roberto Clemente--while also making statements such as this one.