NHL
Next Article
Celtics sign Joe Johnson from out of nowhere

Everyone knows Jayson Tatum is a player on the court, but off the court too? Who would have guessed it?!

The now ex-girlfriend posted an entire paragraph ripping Tatum to shreds on Instagram, calling the NBA star easily replaceable and full of flaws.

Celtics Jayson Tatum's Girlfriend Upset He Left Her to Be a Family Man With His Baby Mama; Leaves a Scorch the Earth IG Post Saying He'll Never Find a Woman Like Her Again & Tags Him at The End (IG Story-Pics-Vids) https://t.co/a8OOH8K6oL pic.twitter.com/F8kBVLlTz7 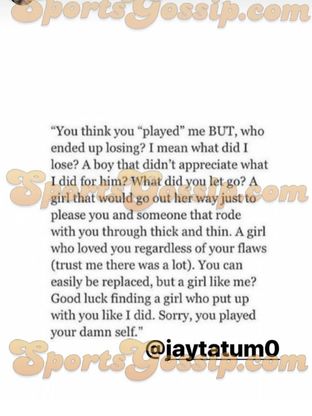 With the Celtics trying to get back on top in the Eastern Conference, Tatum being distracted by his ex-girlfriend is the last thing that Boston needs.

Jayson Tatum’s Got Two Girlfriends Like Lou Will, One Just Had His Baby, But Hang Out at Games (Photos) https://t.co/PIeQifWlUp pic.twitter.com/cvLFcbMWAN

Tatum's off-court flings don't seem to be impacting his play though, as his points (13.9 to 16.7), assists (1.6 to 1.7), and rebounds (5.0 to 6.5) are all up from a season ago. These numbers are a bit surprising considering that the return of ​Gordon Hayward was expected to take away some valuable minutes from Tatum. Instead, it seems like Tatum has stolen some of Hayward's minutes (most likely because Hayward hasn't been playing like himself since coming back to the hardwood).

I guess you can say that Tatum isn't that shy kid from Duke anymore.